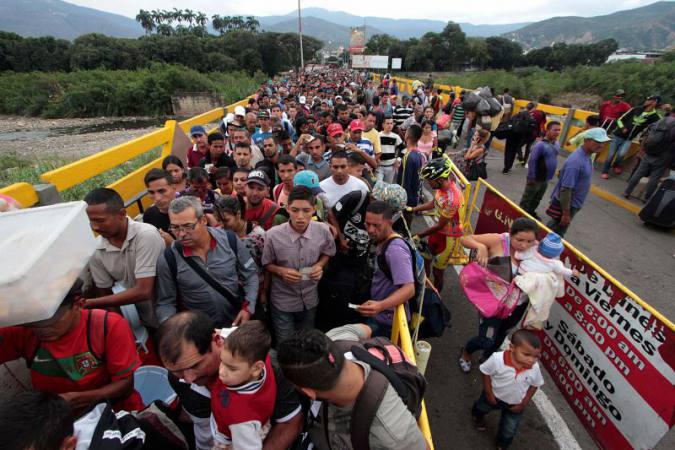 The crisis in Venezuela continues to cause thousands of citizens to leave the country looking for a better future. According to a report in The Wall Street Journal, around 1.2 million Venezuelans have emigrated in the last two years, taking as source Tomás Páez, an immigration expert at the Central University of Venezuela.

The US newspaper compares the number of Venezuelans who crossed the border into Colombia in 2017, some 550,000 (this year more than 50,000), with emigration due to violence that has led 600,000 Syrians to seek asylum in Germany or the 650,000 Rohinyas who they moved from Burma to Bangladesh because of the repression against them.

While in 20 years, three million citizens have left Venezuela, reason why they also call this migration phenomenon the “Venezuelan Diaspora”. “As the collapse of Venezuela’s economy deepens, the number of those fleeing is accelerating,” Páez told the US media. Meanwhile, according to the Colombian program Tu mundo hoy, 200,000 Venezuelans have gone to Ecuador in the last three months, with the intention of staying or continuing their way to other countries in the region, most of them to Peru and Chile.

Every day, between 3,000 and 3,500 Venezuelans cross the border looking for opportunities in new frontiers, in some of them they already have relatives, according to those interviewed by the program.

He also showed that people of other nationalities ask for more state action to remedy the long queues that form in migration. The arrival of Venezuelans to Colombia and other countries in the region creates a challenge. While internally, the situation hits different sectors of Venezuelan society, including the most vulnerable.

The Washington Post reported that due to the crisis and shortage some parents have reached such a point of leaving their children in orphanages or hospitals, and even in metro stations on public roads, according to the Venezuelan newspaper El Nacional. The Fundana Foundation indicated that it received 144 children during 2017, mostly because their parents could not support them.

A mother of three children who are in the place, Angélica Pérez, explained to the international media that she had delivered her children because she lost her job and her last savings she spent on an ointment when one of her daughters, 5 years old, became ill. “You do not know what it is to watch your children go hungry. You have no idea. I feel that I am responsible, as if I had failed them. I’ve tried everything, “said Perez.

Last Monday, the IACHR had denounced in a report the serious situation in terms of human rights and political, institutional and humanitarian deterioration. However, the commission’s president, Francisco Eguiguren, indicated that the international community has no other way than to maintain pressure on the regime to seek a solution.

Venezuela again lost its right to vote in the UN General Assembly for not making its contributions to the body. The same thing happened in 2017, but the previous year he paid part of his debt and recovered it. Now with the crisis, we do not know what will happen. (I)