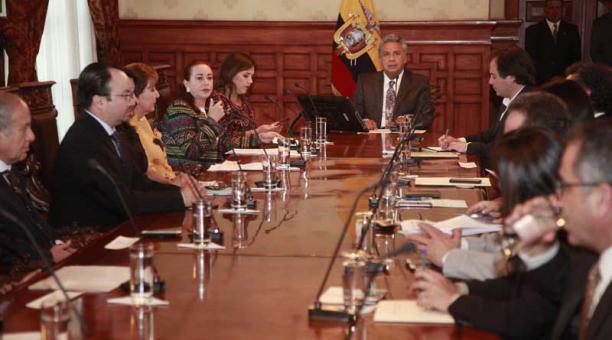 President Lenin Moreno begins a new stage of his Government. Eight months ago came to power with 45 ministers, secretaries and senior officials, including several representatives of the then pro-government movement that prompted Carondelet.

As of May 24, 2017, this work team was modified, in configuration and number; some posts increased, another did not attend and there was rotation of ministers. The President has accepted the resignation of 13 senior officials, not counting the departure of former Vice President Jorge Glas.

For example, the most controversial figures have left their positions in the Executive and also in the ruling party to become, even, opponents. Among them are

Ricardo Patiño, Paola Pabón, Virgilio Hernández and Guillaume Long. Former officials, together with the legislators and local authorities that disaffiliated from the 35th, are now looking for a name under which to raise a new political movement and obtain an electoral locker.

Other casualties along the way were those of Richard Espinosa, of the IESS Board; Eduardo Mangas, of the General Secretariat; Iván Espinel, of Inclusion; Carlos Bernal, from the Secretariat of Reconstruction; Santiago León, of the National Financial Corporation; Javier Córdova, of Mining; José Cadena, of Electricity; Otilia Cordero, of Agriculture. Espinosa, Mangas, Espinel and Bernal were the most famous cases, since they came out because of questions about their actions as public officials.

In addition, the positions of the presidential advisors: Patiño, Hernández and Rivera, were not replaced. And three other entities were entrusted to other officials: Housing, Mining and Presidency of the IESS Board.

In the Cabinet there are currently 16 officials who were close to former President Rafael Correa, but who in this time have closed ranks around Moreno. A dozen were designated by the former president as their delegates to public institutions or as part of the same Cabinet; others were legislators or local authorities close to the then Head of State.

This is one of the evidences of the distancing between the President and his predecessor, which leaves Moreno free to readjust his Cabinet, in the post-consultation scenario. Since his proposal triumphed at the polls on February 4, 2018, representatives of civil society and analysts have agreed on the need for the President to refresh the image of the Executive, especially on the economic and foreign policy front.

And changes in intelligence and communication devices are not ruled out. The challenge of the Chief Executive, if he decides to make way for the changes, is to know which figures could occupy the positions and, in addition, who could face his proposals to return to the spirit of Montecristi, social work and pragmatic politics.

The Government announced that after the referendum there were likely adjustments in the Cabinet. One of the criteria that would be taken into account is the performance of the officials of the different State portfolios, in the first eight months of administration. (I)