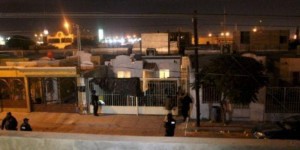 Last Friday night, an armed group of people attacked several persons who were gathered in two houses—located in Horizontes del Sur in Ciudad Juares, the most violent city in Mexico—“The attackers arrived in two cars, they entered the households and shot the people inside, who apparently were celebrating a party,” noted the prosecution.

In a statement, the General Attorney of the State (PGJE, local prosecutors) reported that during the “unfortunate events” 13 young people were killed—6 women and 7 men—seven of them have been identified, the victims are aged between 16 and 25.

Fourteen men and one woman were injured—including a 9 year-old child—they were transferred to the clinic 66 of the Mexican Social Security Institute, said the agency.

Prosecution sources in Juarez said seven of the wounded were in critical health conditions.
Forensic personnel and experts for the prosecutionare still working on the crime scene, where 70 7.62 X 39 mm caliber caps were found—as well .223 caliber—.

The general attorney of Chihuahua, Carlos Manuel Salas, went to Ciudad Juárez in order to lead and coordinate other activities with law enforcement agencies and the Mexican Army.
Drug cartels in Sinaloa and Juarez have been fighting for several years the control of Ciudad Juarez—Across the border from El Paso (Texas, USA), a strategic point for drug trafficking to USA—.