15 Miners Have Been Released

Chile is celebrating the successful rescue of the miners who have been trapped 700 meters underground for 70 days in San Jose mine, ten of the workers have already been released. 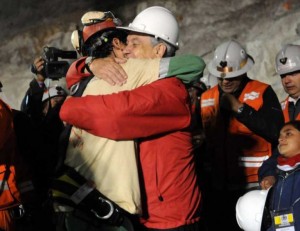 President Piñera hugs Florencio Avalos, the first miner who emerged to the surface

Alex Vega Salazar, 31, is the 10th miner to be freed, according to Health Minister Jaime Mañalich he is in good physical shape.

“Things are going on wonderfully,” said the minister, he also added that the miners who are still underground are emotionally stable.

Mañalich affirmed the miners would be sent to a Copiapo health center for two days after they come out of the mine, the workers who have been released are already receiving medical care.

Millions of eyes around the world were watching the live rescue of the miners, which officially began at 0:10 when Florencio Avalos came out to the surface.  The first released miner, 31, got out of the capsule after a 15-minute trip through the shaft that was drilled for 33 days.

Avalos was wearing dark glasses when he emerged to the surface, surprisingly he was calm; his sons and wife, on the other hand, couldn’t help their excitement.

President Sebastian Piñera was at the rescue scene too; he didn’t want to miss any of the happy moments where families reunited with miners shedding tears of joy.

Mario Sepulveda, 39, was the second miner to be liberated and he surprised everybody with his humoristic attitude. He yelled excitement phrases just before getting out of the 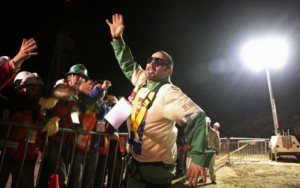 Mario Selpúlveda was the second miner who came out

capsule, and he began to give away rocks he had brought in a bag to everyone he saw. “I think I had extraordinary luck. I was with God and with the devil. And I reached out for God,” Sepulveda said as he awaited the air force helicopter ride to a nearby hospital where all the miners were to spend 48 hours under medical observation.

After the fifth miner made his ascend– 19-year-old Jimmy Sanchez, the youngest and the father of a months-old baby — the rescuers paused to lubricate the spring-loaded wheels that gave the capsule a smooth ride through the shaft, then resumed the rescues.

Piñera said the 33 miners were an example of unity, bravery and perseverance for the country. “These miners and the earthquake victims prove that when we Chileans work together, we can do great things, I hope we remember this,” he added.

The Chilean President announced that the “campamento Esperanza” place would become a memorial site so that future generations remember this achievement.

He also said that San Jose and other mines are banned to operate until they have the necessary security systems “they have to guarantee the safety of workers’ life”.