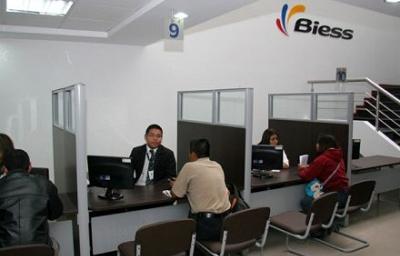 16 real estate developers, yesterday signed an agreement with the Bank of IESS (Biess ). The objective is to reduce the approval time of mortgages credits.

Hugo Villacrés, Chairman of the Biess, said that the idea is that developers, who best know the clients and the processes, take care of the proceedings with the law firms they trust.

It is estimated that this measure reduces the transaction time from 133 days to 89 days, according to a term by President Rafael Correa.

This initiative will also depend on how the Biess down their own times from 61 to 30 days;  and the colaboration of registrars and municipalities regarding the a decrease from 72 to 59 days.

Hermel Flores, President of the Chamber of Construction Industry ( Camicon ) indicated that builders have spoken with the Mayor of Quito, Mauricio Rodas, to seek a reduction in time. However, he warned of the problems to obtain a building permit that lasts up to a year .

Villacrés, on the other hand, said that those who do not do the paperwork with a promoter shall do it through the Biess credits factory. He explained that users will not be alone in this process.