17 false calls of bomb threat in Guayas are investigated 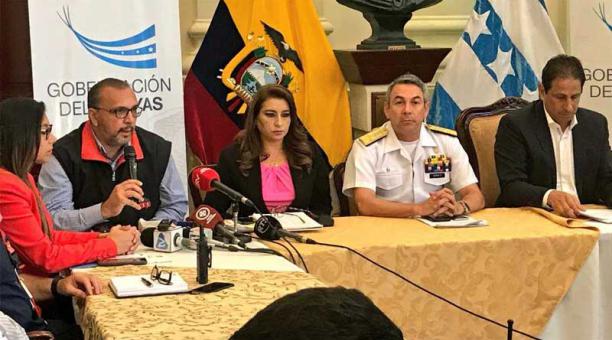 Two teenagers were detained on Wednesday afternoon, May 2, 2018, after a false call of bomb threat in a public school in the north of Guayaquil. They both study on the campus that was evacuated and were identified as the perpetrators of the threat from a cell phone.

In the last two weeks, the Integrated Security Service ECU 911 has reported 17 false calls due to the threat of explosives in public and private institutions in Guayas. The increase coincides with the conflict with irregular groups in the northern border of the country.

The protocol that will be applied in these cases was analyzed on the morning of this Thursday, May 3, 2018, in the Governorate of Guayas. Governor Jose Francisco Cevallos said they will be severe in applying sanctions to those who disturb the peace. “We call on citizens to refrain from making calls that cause serious damage to tranquility. It is not a game and those who commit this type of crime will be placed at the orders of the authorities, “he warned.

From the Prosecutor’s Office it was announced that a specialized agent will analyze the false calls to identify the offenders. Patricia Morejon, Provincial Prosecutor of Guayas, indicated that article 366 of the Organic Penal Code (COIP), which deals with terrorism, could be applied.

This article states that the person who “keeps the population in a state of terror, through acts that endanger life, physical integrity or freedom (…) will be punished with imprisonment of ten to thirteen years ” “If we consider that these calls have caused terror, because people had to run for their safety, this is part of an alleged crime of terrorism in the degree of attempt,” said Morejón.

On the afternoon of Wednesday, May 2, the buildings of the Court of Justice of Guayas and the Council of the Judiciary, located next to the Parque Centenario de Guayaquil, were evacuated.

The explosives team of the Police arrived at the place and verified that it was a false call. Earlier, in the morning, they also went to two private schools in the north of the city. Children and adolescents of all ages were grouped into safe points and their parents arrived desperate to remove them.

Something similar happened in the tax camp where two teenagers were held. Lenin Zeballos, provincial director of the Council of the Judiciary of Guayas, explained that after the investigations it was determined that one of the students only lent his cell phone without knowing the type of call his partner would make.

The socio-educational measures were applied to the perpetrator of the threat: he must complete 100 hours of community work, write an essay and ask for public apologies. In addition to the judicial measures, Éricka Lainez, undersecretary of Education of zone 8, said that the Organic Law of Intercultural Education (LOEI) could also be applied, which in articles 330 and 331 establishes maximum sanctions, including 30 days of suspension and separation and transfer to another educational establishment.

She also recalled that the schools maintain continuous training in situations of risk. And that there are protocols for the evacuation and location of safe sites. Each false call by bomb threat demands a deployment of resources.

Marco Figallo, zonal coordinator of the ECU 911 system, explained that the alerts generate the mobilization of more than 50 people, including specialized police officers, doctors and traffic agents who cordon off the perimeter of the evacuated institutions. Figallo also recalled that Article 396 of the COIP establishes a prison term of 15 to 30 days for the person who improperly uses the unique number of 911 emergency care, and that this action involves the displacement of resources. (I)