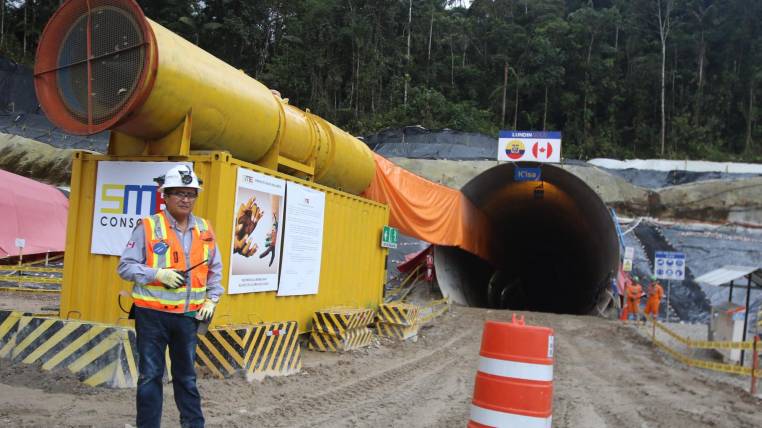 The doors to extract gold opened. Last Wednesday the entrances of the Fruta del Norte tunnels (FDN) were inaugurated, located in the Los Encuentros parish of Yantzaza canton (Zamora Chinchipe).

This is the first large-scale underground mining project in the country that runs the Canadian Lundin Gold.FDN, according to Lundin, has estimated probable mineral reserves of 4.9 million ounces of gold and 6.8 million ounces of silver.

The extension of the inaugurated tunnels reaches more than 3 kilometers and when it reaches 5.5 kilometers of tunnel, in the fourth quarter of 2019, the first gram of gold will be extracted, said Eduardo Cortez, mining technician of Lundin.That is, to reach the precious metal, the mining company has to dig about 2.5 kilometers of tunnel.

After testing, it is expected that commercial production will be carried out by May 2020.Kuri (gold in the Shuar language) and K’isa (fruit in the Kichwa language) are the names of the two tunnels, whose twin underground access ramps will serve to connect the surface with the deposit, which will be at a depth of 450 meters.

This project has duration of approximately 15 years of production. By 2034 it is planned to reach 18 kilometers of tunnel.On average, 10 grams of the precious metal is expected to be extracted for each ton of stone.Alone in the tunnels, said Ron Hochstein, president and CEO of Lundin Gold, about $ 120 million.

The construction of the tunnels is in charge of SME, a consortium made up of the Ecuadorian construction company Semaica and the Chilean company Más Errázuriz.In total, more than $ 700 million will be invested in all civil works.

It is estimated that FDN will generate an annual gold average of 325,000 ounces for 15 years, the projected life span of the mine, which will produce doré bars and gold concentrate.According to company data, during the construction period of the gold project, it is expected to reach a recruitment peak of approximately 1,800 people. Currently, 53% of these workers come from Zamora Chinchipe.

Last year, Hochstein said, the miner had 290 local suppliers and purchases of these merchants amounted to $ 12.5 million.It is estimated that Ecuador would receive $ 928 million during the 15 years that the project lasts. This is equivalent to a profit of $ 71.4 million per year for the State, in addition to the payment of taxes and royalties.

This is thanks to an injection of capital for the Mirador project mine and Lundin’s investments, as well as the start of exploration operations in other projects and the advancement of others that are currently underway.

The Minister of Mining, Javier Córdova, said that the community surrounding the Fruta del Norte project has received $ 45 million as a concept of anticipated royalties. $ 20 million more will be received later this year. This has been invested in works such as hospitals.

Cordova said that the neighboring sectional governments will receive between 150 to $ 200 million in the 15 years only in royalties (about $ 12 million a year). For this bowl, the authorities should plan in what they want to invest that amount. (I)