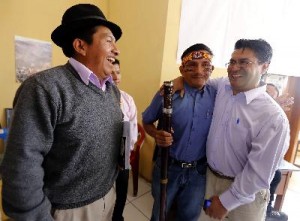 The permanent vigil of the indigenous of the Coast, Mountains and Amazon region in the CONAIE headquarters in Quito will be used tocarry out political training sessions with 400 leaders. These began on January 21 with the delegation of the Sarayacu people.

Then, they shall “work in the strengthening of grassroots organizations,” according to the head of CONAIE Jorge Herrera. The goal is to maintain their building as “historical symbol of the movement fight” against government announcements of a possible eviction.

Herrera recalled that governments “have wanted to divide the movement.” And he criticized the alliance that the ruling party established with some groups. Santos Villamar, president of the Fenocin, replied that they do not seek to divide the CONAIE. The alliance, he said, works on a proposal that will be taken to president Rafael Correa.