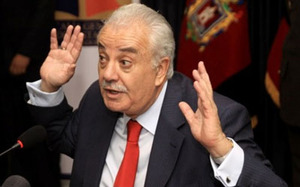 The Attorney General’s Office reported that as a result of research carried out for a few months to three companies, it was achieve a monetary block, to the State, $ 57 million in cash and an additional 2 million in properties.

Investigations revealed that the three companies operated with the Unitary System of Regional Compensation (Sucre), making fictitious exports and overvalued with Venezuela. “This way they receive large sums of money and then divert it to tax havens,” said the statement from the Prosecutor.

According to the prosecutor, Jose Luis Jaramillo, “these operations do not reflect a logical tradeoff between money received and exports, which have difference, in some cases exceeding the thousand percent.”

Moreover, the Internal Revenue Service (IRS) and the Superintendency of Companies reported to the prosecutor that the three companies would be “facade that simulated a corporate, commercial and financial operations.”

The attorney general of the nation, Galo Chiriboga, placed in the arraignment hearing, during last Friday, the pretrial detention for two representatives of the companies and said that because “there are irregular operations of foreign trade, abusing public funds both Venezuelan and Ecuadorian” ordered that prosecutions be carried in Venezuela.