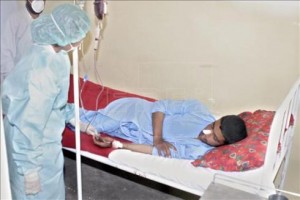 The number of infected people with the Ebola virus in the Democratic Republic of Congo (DRC) amounts to 62 cases, of which 25 peoplehave died, according to the last count made ??by the World Health Organization (WHO).

The outbreak of Ebola in DRC is independent and has no connection with the epidemic of the same virus that has already infected more than 4,000 people and killed more than 2,000 in West Africa (Guinea Conakry, Liberia and Sierra Leone).

This outbreak began when a woman cleaned, prepared and cooked a wild animal her husband hunted in the forest and which was presumably infected with the virus.

The government, with international assistance, is doing everything necessary to keep under control the outbreak, including border surveillance, and awareness and sensitization talks on the disease, the WHO specified.

Reform to the Telecommunications Law is still pending