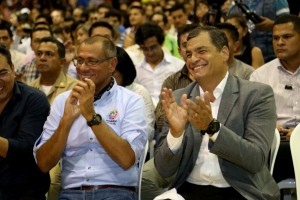 64% of Ecuadorians think that the country is going badly and 39% think that the situation will get worse, according to a survey published Monday by the Cedatos-Gallup firm.

The country is going through an economic crisis caused by the falling price of oil, its main export commodity, which has fallen in the first quarter of 2016 to an average price of less than $ 30 per barrel, while the fiscal budget was estimated on revenues of 35 dollars per barrel.