The Cedatos pollster developed a national study to find out the opinion of the population regarding the mobilizations that the country has been experiencing since June 13, after the convocation of the Confederation of Indigenous Nationalities of Ecuador (Conaie), which is already celebrating its tenth anniversary day. 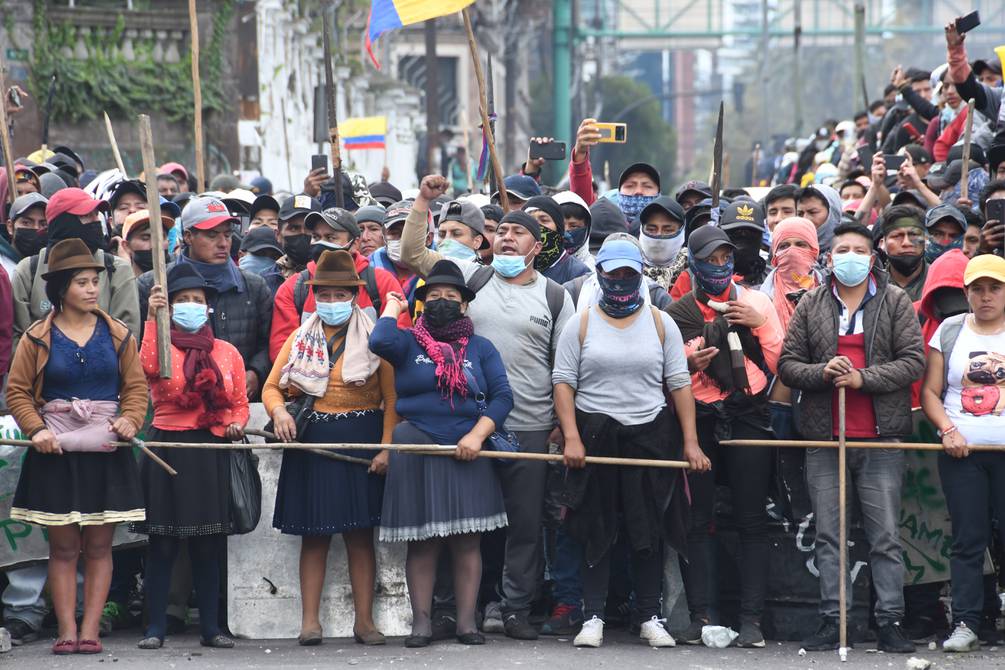 Indigenous demonstrators protested on 12 de Octubre avenue, trying to enter the National Assembly, but were prevented by the police.

According to the study, carried out in twelve cities in urban and rural areas, 76.4% of Ecuadorians consider that after the dialogue the national strike should end since it is necessary to work and live in peace.

50.3% of the citizens consulted express that the demands of the protesters are justified, although 64.2% do not approve of the form and mechanisms of protest and 72.4% reject vandalism, aggression and infiltrators in the demonstrations , as they consider happened in the mobilizations of October 2019.

Regarding the reasons of the leaders of the strike to justify the mobilization, those consulted say that they know and approve of the following: 29.3% support being against crime and insecurity in the country; 25.7%, lack of employment; 25.1%, the price of fuel; 18.2%, the shortage of medicine and health care, and 3.5% consider valid the struggle for access to education.

Among the main reasons given for not supporting the national strike, 29.5% of citizens say that it was due to vandalism and fear; 27.2%, because you have to go to work; 16.0%, by the infiltrators who are there to overthrow the government of President Guillermo Lasso; 11.5%, because the indigenous people do not represent them; 6.3%, because the same chaos of October 2019 is being generated, and 3.2%, because they are militants of Correismo who want to overthrow the Government.

Regarding the demonstrations against the national strike registered in several cities , 61% are in favor, mainly due to aggression, vandalism and infiltrators among the indigenous people, and 31% are against it, while 8% did not respond.

Regarding the measures announced in response to Conaie from the Executive, the study found that 66.3% approve that public services and strategic sectors not be privatized; 69.2%, the call for joint dialogue; 75.4%, that there is no increase in the price of diesel, extra gasoline, eco-country and gas; 62.5%, agricultural loans from $5,000.

Likewise, 61.5% approve the forgiveness of overdue loans of up to $3,000 by BanEcuador; 72%, the subsidy up to 50% in the price of urea; 67.4%, that the budget for intercultural education be doubled; 76.6% consider positive the declaration of emergency in the public health sector; 51.5% support the increase in the Human Development Bonus to $55 and 60.4% believe that the declaration of a state of emergency in the provinces of Pichincha, Imbabura, Cotopaxi, Tungurahua, Chimborazo and Pastaza is correct due to the violence of the protests. (YO)

“Cacerolazo” for Peace in Quito