87 complaints against media were registered in a year 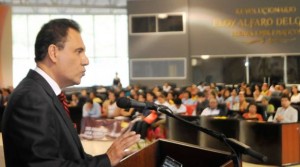 After a year of putting into effect the Communication Law, 87 complaints were registered against the media. From these, 27 are from citizens, 14  from self-governments and 14 from social groups.

The Superintendent of Information and Communications, Carlos Ochoa, said: “At some point many media said that this law would be exploited by politicians or government agencies”. Ochoa noted that from the Legislative 3 cases of complaints, 6 from public entities,  and 1 from a control entity were raised.