$ 900,000 were assigned to publicize induction cookers 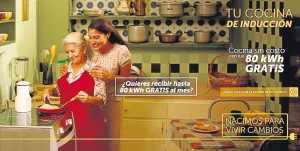 Almost $ 900,000 have been spent by the Government for the hiring of surveys and advertising campaigns to support its project of induction cookers and warn of the dangers of domestic gas.

From January to September this year, four government contracts have been recorded, which include one of the Presidency of the Republic for $ 31,050 “for the promotion of the renewable, safe and efficient energy program through the use of induction cookers,” signed in April between Gustavo Blum, administrative coordinator for the General Secretariat of the Presidency, and Alfredo Melossi, manager of Garwich SA.

The contractor, according to documents of the process, is obliged to provide the radio advertising service “to encourage citizens to change their gas stoves and use induction cookers,” in order to strengthen the program of the renewable, safe and efficient energy program, considered as a priority of the national government.”

This Daily requested an interview to the Presidency on this subject, but they indicated that the request should be made to the Ministry of Communication, an agency that did not accept the request.
Source: http://www.eluniverso.com/noticias/2015/12/30/nota/5320240/900000-se-asignaron-difundir-cocinas-induccion