A contentious trial would force the state to pay $ 140 million 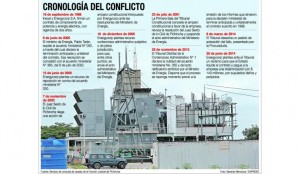 On June 25, 2014, Energycorp Energy Generating Company SA brought before the District Administrative Court a lawsuit against the Ministry of Electricity and the Attorney General.

The company, engaged in the operation of power generation facilities requires the settlement of a sales contract of power and energy, for $ 38 million, signed in 1998 with the late Ecuadorian Institute of Electrification (Inecel), and that two years later the then Ministry of Energy and Mines, through a ministerial agreement and a ratification, decided to terminate it unilaterally and in advance, for alleged delays and noncompliance.

The plaintiff asked the Court to meet its request for compensation in consideration of the damage caused by the breach of that commitment. The amount required includes consequential damages and lost profits.