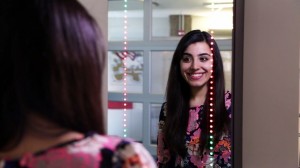 iStrategyLabs digital agency has developed a new product called S.E.L.F.I.E.  (‘Enhancing Self Live Feed Image Engine’), which intends to solve the problem of self-portrait because of the short arm length when trying to capture a good angle of the face.

The S.E.L.F.I.E. consists of a mini Mac hidden behind a two-way mirror, provided with a facial recognition software, which activates the LED lights behind the mirror, indicating that the picture is being taken. After the self-portrait is ready, the software attaches its logo and posts it on Twitter. the S.E.L.F.I.E. is just an experiment from iStrategyLabs, therefore, to acquire this innovative device, it has to be done through the company.

Red Moon can be seen from Ecuador at 02H45 of Tuesday