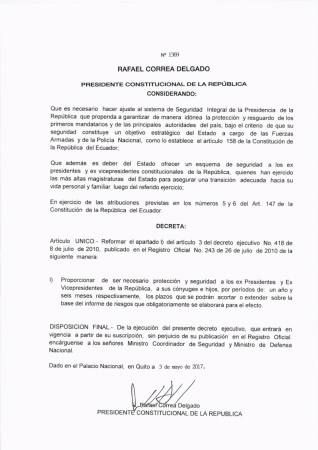 Rafael Correa would be the first former president to enjoy the security of the Armed Forces and the Police. On May 3rd, he signed Decree 1369 which states:

“The former presidents and former vice presidents of the Republic, their spouses, and children should be provided protection and security for periods of one year and six months respectively, which may be shortened or extended on the basis of the risk reports.”

In July 2010, decree 418 was reformed, which ordered the fusion of the Military House and the Air Transport Squadron, resulting into the Presidential Protection Service, a body that was entrusted twelve tasks, including the protection of agents and the Secretary of the Administration during his duties; But now they shall also outline that of former leaders.