A reinforcement of 1,600 men for Esmeraldas 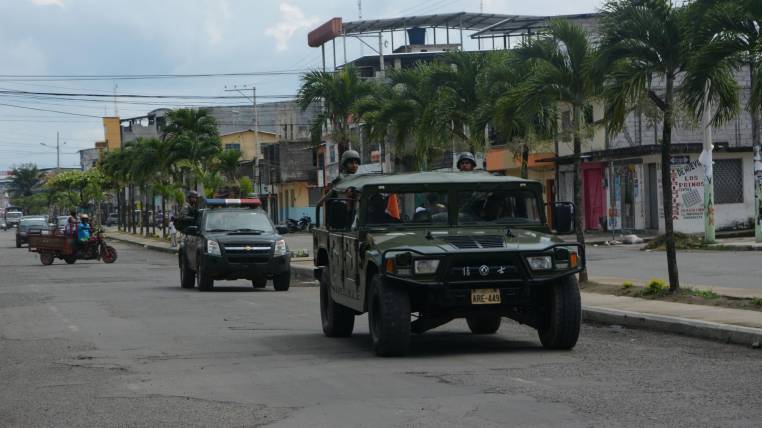 The ex-commander of the Navy, Angel Sarzosa, and Colonel Galo Molina, intelligence expert, warned eight months ago of the high risk that there was in the country of a “Mexicanization of violence” by the proliferation of the so-called Bancrim (criminal gangs) at the service of drug traffickers, who were operating in the provinces of Esmeraldas and Sucumbíos.

Although the presence of members of armed groups such as Los Águilas Negras and Los Rastrojos on the northern border was detected eleven years ago, as reported by EXPRESO in May 2017, the intelligence units of the Armed Forces sought to confirm the suspicions that they were becoming thick with dissidents of the demobilized guerrilla of the Revolutionary Armed Forces of Colombia (FARC), who had preferred to continue with the illicit drug trafficking business.

The confirmation of a greater presence of strangers at the border led, three weeks ago, to a reinforcement of patrols and Army personnel in the provinces of Esmeraldas, Carchi and Sucumbíos. To this is added the new reinforcement of 300 soldiers and 1,300 policemen in the province of Esmeraldas ordered on Saturday, after the terrorist attack with a car bomb to the police command of San Lorenzo, registered at dawn on Saturday, in the pure style of Colombian drug traffickers and Mexicans, which left 28 injured and 200 houses damaged.

So far, neither the Ministry of the Interior nor the Police had revealed the name of the criminal gang suspected of the explosion that reduced to rubble the police barracks of the “Esmeraldaño” canton with higher rates of insecurity and poverty in the country. All the Ecuadorian authorities have said, in the last 48 hours, that the only certainty they have is that the attack is a narco-criminal organization for the capture of drugs of recent weeks, with which they have dealt heavy blows to drug trafficking.

On Sunday, January 28, 2018, after a tour of the barracks attacked, in which he was accompanied by the Minister of Defense, Patricio Zambrano, and the prosecutor Carlos Baca Mancheno, Interior Minister César Navas announced the decision to declare in emergency his portfolio of State to be able to fulfill with the corresponding actions to improve the infrastructure and security of the police detachments of the border. Defense, on the other hand, offered to reinforce military control.

The prosecutor Baca, meanwhile, confirmed that experts from Colombia are collaborating in the investigation process to find those responsible for a dynamite attack that is registered for the first time in the country, attributed to criminal gangs linked to drug trafficking.

The Office of the Prosecutor is also waiting for the contribution of experts from the United States. Affected they keep guard to take care of what little the attack left them In the neighborhood of La Delicia, the car bomb attack on the police command of San Lorenzo (Esmeraldas) “was a misfortune with happiness,” says Neri Maldemar. The 56-year-old man, who woke up terrified at 1:30 on Sunday, thinking “the world is over” lost his home, but not his life or that of any of his relatives.

All left unharmed of a dynamite explosion that left them in the street, waiting for government help to build a new one. For the third night, Neri slept next to the rubble in which the walls of blocks and cement were reduced. He does not want to lose the few things that the explosion left him, and for that reason he declined to go to the hostel where the city’s main church became. Sitting in a pale white plastic chair, under a piece of zinc roof that resisted the explosion and that sheltered from the rain that fell all night, Neri tells EXPRESO that there are people who are stealing what little they could rescue from the rubble. “The neighbor was robbed of the gas cylinder and some pots.”

In spite of the material losses, he celebrates that his daughter has not come home to sleep that night, because otherwise she would have died crushed. It was on her bed that part of the wall of the house fell.

That is one of the 37 homes that were totally destroyed by the shock wave that, according to experts, was greater than a hundred meters around the police station. In front of her house, is her neighbor María Elinda Preciado. The 62-year-old woman does not stop crying because the attack left her homeless, but the rain that fell during all the Saturday night and the dawn of yesterday wet part of the furniture and appliances that she had left.

The plastic did not reach to cover everything. Despite the discomfort of sleeping on the street on improvised roofs with plastic, she wants to continue caring for what little she has left of a house in which she lived with her children. Her neighbors in disgrace did the same and as a group they take turns to make the guards, although in the surroundings there are policemen and sailors from the naval battalion of San Lorenzo.

Not all affected and affected families are in the shelter, as some decided to sleep in the homes of family or friends. According to the Vice Minister of Risk Management, Ricardo Peñaherrera, 21 families have been accommodated in this site. In total, 78 people have been assigned a bed and delivered food.

The authorities assured Sunday that there are fourteen houses that suffered a complete destruction, of a total of 63 that were reached by the shock wave of an attack that fortunately left no fatalities. Technical staff of the Ministry of Urban Development and Housing continued, until yesterday, in San Lorenzo, evaluating the state of the houses to develop a reconstruction plan and estimate a budget. Although no authority has officially announced it, there is a possibility that new homes will be built. (I)