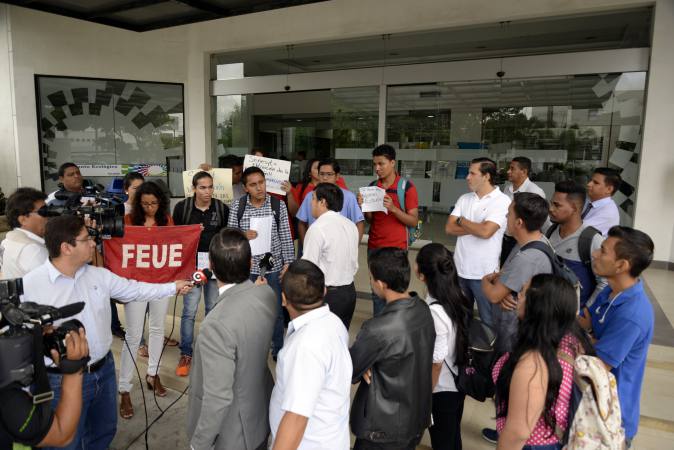 Carrying banners that read: “I want to study,” “Publish the list of quotas,” students arrived at the offices of the National Secretariat for Higher Education, Science, Technology and Innovation (Senescyt).Yesterday morning the young students who did not get an entry quota for the University of Guayaquil, as well as leaders of the Federation of University Students of Ecuador (FEUE) held a sit-in, in addition to handing over a list of proposals to the Senescyt.

In this university alone 64,537 students applied for 5,766 quotas available for leveling courses.

The allocation of quotas is done by scoring, who obtained the highest marks (those who obtain 1000 points) are allowed to make another test. This situation has caused discomfort among those who, despite having achieved high scores, could not access the desired careers.

The student leader assures that the state owes VAT refunds to certain public universities since 2014. A student leader of the School of Medicine questioned the fact that the government did not make improvements during the time the school was intervened.

Galo Salcedo, President of the University of Guayaquil, stated yesterday that the university is analyzing the possibility of increasing the number of students per classroom in order to expand the student quota.

That increase could be 10% or more and is subject to a study, said President Salcedo. For its part, the Senescyt released the dates set for the Waiting List process, which comprises two more stages for those who did not get a quota.

Applicants will be able to choose the careers of their choice again, for which it is expected that around 50% of the academic offer defined for this period is available, reported the education board.

The procedure is to record the career options on the universities’ website, between May 12 and 15 and from 21 to 23 of the same month.

“They do not really give us the exact solution to get a quota,” said Francisco Villacis, who applied for the Architecture career.