A time of deficit for public enterprises 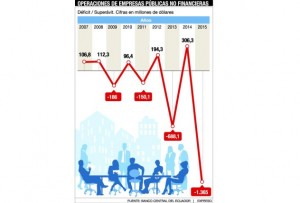 The non-financial public enterprises reported a deficit, during the year 2015, of 1.365 million dollars. That cypher is the highest registered since 2007, according to the balances of these organisations on the Ecuadorian Central Bank.

In 2014, the difference between income and expenses was positive and it reached 306,3 million dollars: the highest superavit in the administration of Rafael Correa. The highest negative number, before 2015, was in 2013: 688 million dollars in the negative.

Who did contribute in this situation? Marcos López, ex directory member from the Central Bank, explained to the daily “EXPRESO” that the balance is located in all these non-financial enterprises managed by the State: Tame, Corporación Nacional de Telecomunicaciones (CNT), Coca-Codo-Sinclair, Fabrec, Petroamazonas and Petroecuador.

López pints that the Petroamazonas and Petroecuador arethe potential responsible entities in last year’s deficit. According to this criteria, the costs of preselling oil and the difference paid to the private oil extracting companies were registered in the balances of Petroecuador. (I)