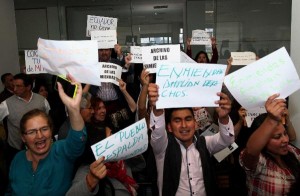 The session was marked by protests. About 20 people from the CREO and Pachakutik movements surprised the assembly members who were going to install the meeting of the Commission for amendments.

The protesters, who managed to circumvent security, took out their banners and shouted: “Amendments no, referendum yes” and “file the amendments.”
The shouts delayed for several minutes the beginning of the session that was going to discuss the text of the 16 amendments to the Constitution. The chairman of the board, Juan Carlos Cassinelli, requested order and silence repeatedly.

The legislative guard intervened to protect the assembly members. They closed the doors that were opened only to let the supporters of the PAIS party get in. They shouted against opposition assembly members. The target of their slogans was the representative of CREO, Patricio Donoso: “Lasso out, Lasso out” they shouted.

Thus, with shouts and jeers from both sides, the first interventions were done. After two of the nearly four hours of the session, began the discussion of the documents. Concrete proposals for changes to the text of the amendments were raised. There were surprises.

Cassinelli posed not to approve the amendment of the Public Defender, which sought to expand its territorial coverage. He argued that the agency has administrative autonomy and is not subject to the control of the judiciary branch. The amendment, therefore, would denature the Ombudsman. Furthermore, the Constitution already allows the regional dispersion. “It’s a subject that can be removed,” he said.