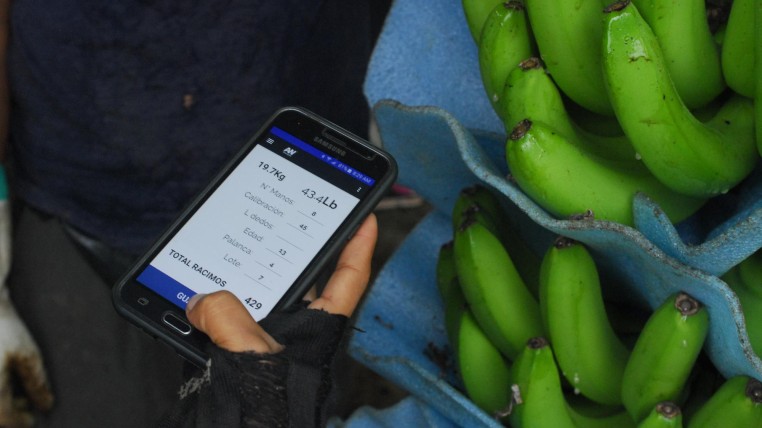 To produce more than 4,000 boxes per hectare and that after that they go with the ideal weight (not more than usual) is possible. The two things are difficult, but Jorge Quintana, a producer from Valencia (Los Ríos) has invented an adviser that makes little mistake: the Allweights App.

“This is born from the demand for transparency and security,” says the banana worker during a tour with Newspaper EXPRESO on the farm that applies it Security and transparency for both the producer and the exporter. The cardboard that goes to Europe and the United States, especially, must have 41.5 pounds, as required by the Ministry of Agriculture (due to shrinkage during transport to the destination countries), although they should be only 18.14 kilos (almost 40 kilos ).

Why give one or a half pound per box? For a large producer, there is a lot of money that he stops receiving. But beyond that, the weighing through an electronic balance, cluster by cluster, allows to know the situation of each lot, of each farm. The information is online, because the idea is that it is a versatile and fast tool so that the owners of the farms or the administrators can make the corrective immediately. This guarantees, according to the work started in the Doménica hacienda in Valencia and in others nationwide, a better use of resources. What Allweights does is deliver information, data, that can be associated or cross with other production variables, achieving an “extremely clear picture of what the situation is” of the farm.

You can cross the weight of the bunch, the size, the number of hands, shrinkage or defects of the fruits with the number of leaves, ages, and fertilization. “So I do a punctual handling, with this absolute truth. Help is impressive. Now I do not conceive anything without this.

“When you have accurate information and data is demanded and saved. If the exporters ask for a margin of 1.5 or a half pound more, to guarantee the peso, at least the producers lose half a pound per box.

The need to create this App that weighs the bunch, the trays where it is selected and sent to the packaging and then the boxes was born in Jorge Quintana because one of its customers in Europe billed $ 7,000 for “low weight”.

From January he will report to his clients, in detail, the traceability of each of the 1,080 boxes that go in a container; “Now I am also selling confidence and transparency,” the banana company Diario EXPRESO points out.

In the Doménica hacienda this information also serves to incentivize the operators that perform better.

Gustavo Marún, president of Agrobán (Ecuadorian Banana Regional Corporation), points out that this shows that Ecuador is not behind and that technology must be used daily in the most important sector for the national economy.

Víctor Haón talks about a complement to other processes in the field to improve productivity and that is also new technology: the use of leach lixiviates, together with other inputs, which are now being injected into the pseudostem of the banana plants.

Meanwhile, the company Procesos IQ is also working on another App, which works with aerial cameras that identify problems through some variables, including the color of the sheets.

Balances work on Android devices. The information is stored in the ‘cloud’. This is sent anywhere in the world.

There are three more scales. One of tray, another of correction and another of reconfirmation before dispatching the box.

In another program, an operator enters the losses, defects and qualities. (I)