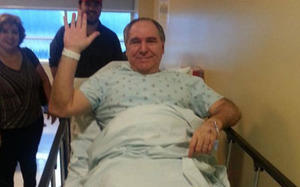 The former president of Ecuador, Abdala Bucaram had a successful catheterization operation, which lasted four hours in the clinic Punta Pacifico of Panama.

His eldest son Jacobo Bucaram Pulley said on his Twitter account: “My leader is out, thank God, everything went well.”

The surgery began at seven o’clock last Wednesday and ended at eleven. During Thursday’s dawn, Abdala himself thanked through his Twitter those who showed their concern for him. “Let it be as God commands it. I love Ecuador.”

According to his son Dalo Bucaram, Assemblyman PRE, last year his father suffered two pre-heart-attacks, therefore, now that he was intervened, he will be in observation for 24 hours. Then undergo a series of tests including MRI.

So far, the doctor of the political leader recommended a treatment of 60 to 90 days, allowing him to resume his normal activities. The users of Twitter @abdalabucaram and their children @daloes10 and @jacoboes10, will allow friends and family to express their speedy recovery.

Cuenca was awarded for conservation of tangible heritage