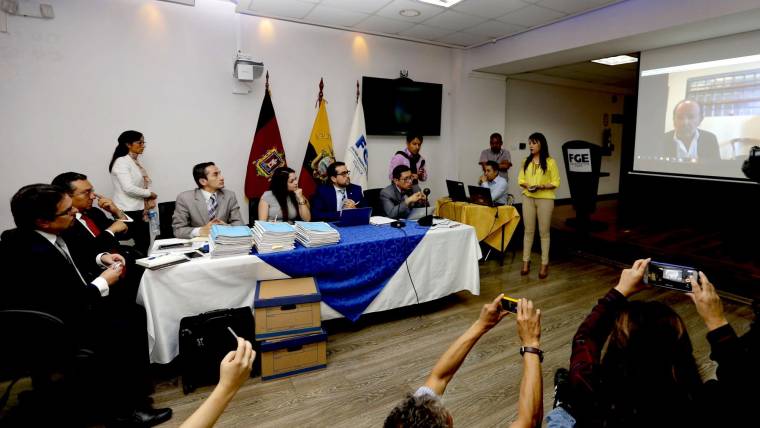 The irregularities of these negotiations and the conditions of disadvantage in the Chinese credits have also been reviewed by EXPRESO in publications published in the last two weeks. As part of the proceedings on Thursday, January 25, the businessman Enrique Cadena, who has been attributed to be an oil intermediary, gave his version.

His appearance was by videoconference from the consulate of Ecuador in Mexico, where he was in transit at the time of the call of the prosecutor Fabián Salazar. His defense attorney, Joffre Campaña, was present at the proceeding and pointed out that in his testimony Cadena answered questions and original documents and certified copies were presented that show that he did not participate in the commercialization processes.

In 2017, the ex-assemblyman Salgado submitted to the Prosecutor’s Office reports from the Comptroller’s Office in which an incorrect management was established in the sale of Ecuadorian oil to China.

Among the anomalies, it was mentioned, for example, that crude oil did not reach ports where Petrochina had refineries, the ex-legislator reminded the newspaper. In an interview given to this newspaper, prosecutor Carlos Baca stressed that the Comptroller’s reports did not establish indications of criminal responsibility. He reiterated that this circumstance was contrary to what was established in the contracts. Salgado points out that because of these anomalies “I involved Jorge Glas (former vice president) because he was the only member of the Board of Directors of the state company that had a name and surname.”

Cadena denied being an oil intermediary or having any relationship with the case, his lawyer said. His client asked that it be investigate in depth. He is an entrepreneur with activities in various areas such as telecommunications, but he has not been involved in hydrocarbons for many years, he added.

A complaint filed four months ago by the activist Fernando Villavicencio with the sponsorship of the Pichincha Bar Association was added to the reports presented by Salgado.

Prosecutor Salazar picked up on Thursday the testimony of the activist who assured that the State was injured in 2,200 million dollars for the signing of contracts with China and Thailand with the use of the figure of strategic alliance.

With this modality, the activist insisted, the public procurement would have been evaded and Petroecuador, the state company, “lost the capacity to market its crude oil”.

The formula to determine the price of the barrel of crude oil preventable to China and Thailand harms Ecuador. One of its inputs, for example, is the cost of transporting oil. Buyers used cheaper boats, but that benefit was not transferred to the country.

Former President Rafael Correa, as reported by EXPRESO on Tuesday, January 23, committed, to obtain 2,000 million dollars, to derivatives of the nonexistent Pacific Refinery. To that are added about 1,109 million barrels of oil that it promised until 2024, in the pre-sales.

EXPRESO published, on Tuesday, the negative implications of signing an agreement with the Chinese bank CDB and Petrochina. That text, which involved derivatives of a refinery that does not exist and that allows China to have Ecuadorian resources, was ordered by former President Rafael Correa.

This newspaper consulted the former president and his answer, sent by Fernando Alvarado, was that “now we are in the final stretch of the campaign and our subject is the consultation… Surely later we will find the opportunity to address other issues”. (I)