Accused leaders of terrorism in Bolivar are plead innocent 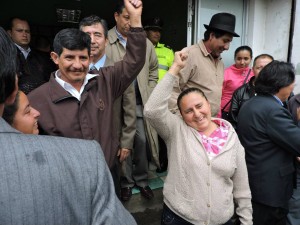 Yesterday at 16:52 Manuela P. and Manuel T. embraced with neighbors, relatives and friends of the San Pablo de Amali community (in the Chillanes county), after leaving the adjudication hearing in the Criminal Court of Bolivar, who were found innocent for alleged acts of terrorism that took place in that town in 2012.

After the allegations and hearing both sides, members of the Court took a recess in the morning. The defendants, lawyers and villagers who accompanied them took the opportunity to relax and talk to reduce tension until the verdict was announced in the afternoon.