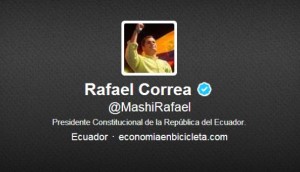 Two young men were arrested last Wednesday at 20:00 for having allegedly “hacked” the Twitter account of President Rafael Correa, in March.

Prosecutors and judicial police agents participated in the detention and raided the homes of Daniel S. and R. Alexander, looking for computers to confirm their suspicions.

Due to lack of evidence, Prosecutor Diana Salazar declined to accuse them yesterday during the arraignment hearing in Flagrance Unit. Following this, Judge Yolanda Cueva ordered their immediate release after twenty hours of detention.

The lawyer for the investigated, Juan Carlos Solines, former candidate for Vice President representing the CREO party, noted that the only evidence the prosecution had was a website created by the suspects in which it was immediately published the news that president’s account had been attacked.