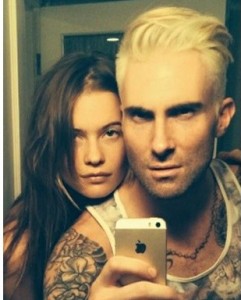 The singer’s change of look is attributed to his participation in the Met Gala Ball, held in New York

The Maroon 5 lead singer, Adam Levine, who is currently a coach of the talent show `The Voice,´ posted a picture on his twitter account where he appears with a new platinum hair look, along with his girlfriend, the Victoria’s Secret model Behati Prinsloo.

The singer´s look has been rejected by his fans, who between criticism and complaints ask him to return to his original color. `I hope people understand that when they say my hair looks horrible, I take it as a compliment,´ was the reply of the singer, whose change of look is attributed to the Met Gala Ball in New York, which takes place every year in May.

Daughter of `Chespirito´ posts a picture of her father in Twitter