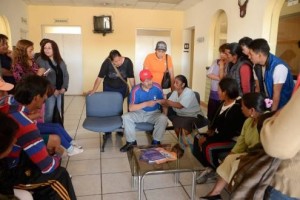 The trial hearing for the group of Mejía high school students, arrested during manifestations on September 17, that needed to be held tomorrow, was postponed for Thursday. The information was known yesterday afternoon.

Julio Cesár Sarango, one of the young Lawyers, pointed out last night that they knew about the date change on internet and not physically or by judicial locker. Sarango added that the prosecutor in the case requested that the hearing be postponed “because he did not have all the evidence.”

Furthermore, José Alomía, another advocate of the students said that “the due process was not respected, even to arrest the guys inside the Mejía School, it doesn´t exist -on what concerns me- a judicial warrant, there is not consent of the governing establishment,” after a 20-minute meeting with about 30 relatives of the detainees.

Alomía estimated that the damage to the property caused by the student manifestations do not exceed the amount of $ 3,500, that the guild who runs it is willing to pay.