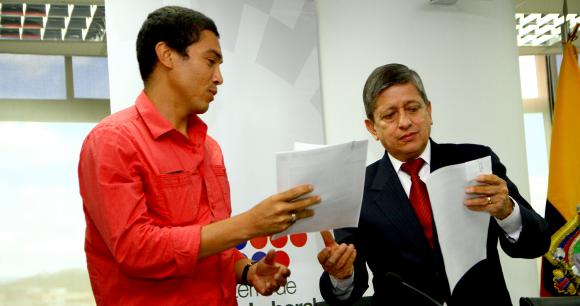 The Vice President of the Ecuadorian Association of Football Players (AFE for its Spanish acronym) Edwin Tenorio, yesterday handed a list of 13 requests to the Minister of Labour Relations Carlos Marx Carrasco to request his intervention in the financial condition Ecuadorians football players live. This, as a consequence of default on salary payments of the players .

Among the requests, it is highlighted the enforceability of the affiliation to the Ecuadorian Institute of Social Security (IESS for its Spanish acronym), something that is not met in the national football . “It is an obligation of the employer, in this case the sport leaders. The new Penal Code (which takes effect from August 10), the non-affiliation will be sanctioned with imprisonment”, indicated the Minister of Labour Relations.

Given this, Carrasco called on the President of the Ecuadorian Football Federation (FEF) Luis Chiriboga to talk about the inconvenience of the players. The appointment will be today in Guayaquil and delegates from the Ministry of Labour Relations would attend.

The Manager of the Association of Football Players Guild, Jorge Guzmán, determined: “There are contracts of $ 170. Othersregister zero. That can not be possible,” referring to contracts recorded in the FEF.

On the other hand, Tenorio added that the AFE sent communications to the Ecuadorian clubs and Arbitration guild, about the posture to maintain paralyzed all activities from Wednesday, 23, July. This players strike will be indefinite until the parties reach an agreement on benefit of the national football and its players.

Today in the afternoon, it was confirmed that the national championship of series A (Wednesday 23 and Sunday 27), are suspended according to the FEF President.

Forbes will have to Asian owners