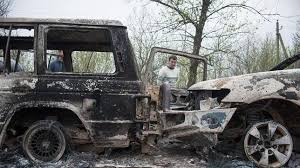 The shooting, in which at least two people were killed, near Slavyansk, one of the cities in the East of Ukraine taken by the rebel, alarmed the Kiev authorities and pro-Russian separatists. The clash occurred at a checkpoint, calls into question the fragile international agreement by which Russia had accepted the disarmament of the militias.

Pro-Russian activists told the Reuters agency that a convoy of four vehicles approached a checkpoint of the militia at two in the morning and opened fire. According to their version, they returned fire and killed two of the attackers, identified as members of the Sector on the right, a group that is linked to the Kiev Government.

This version coincides with the widespread of the Russian media communication, while the Ukrainian Ministry of the Interior has confirmed only one dead and three injured.

They mentioned that broke the Easter truce declared by the prorrusas militia and the Ukrainian authorities about the control of disarm the nationalists and extremists and Russia has shown its indignation for the shooting in a statement.