Against narcos, Ecuador seeks support from Colombia and the us 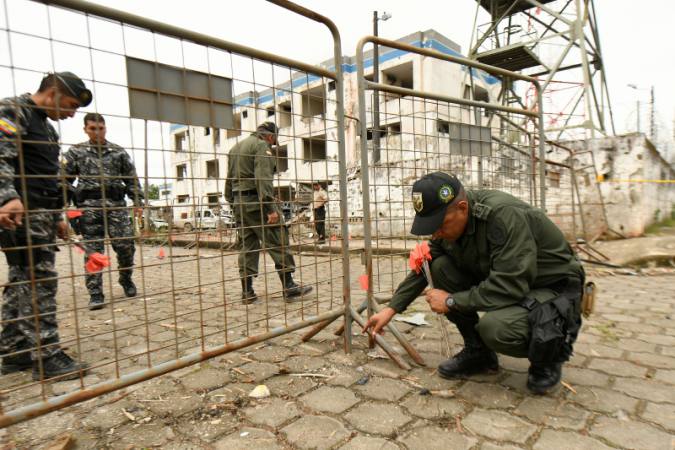 To count on the support in the investigations of expert personnel in explosives of Colombia, to increase the security in police and military detachments of the northern border, and to coordinate in order to access in due time with the collaboration of the United States and its anti-drug agencies decisions taken by the Ecuadorian authorities to handle the explosion of a car bomb in the city of San Lorenzo, Esmeraldas.

Police of the Group of Intervention and Rescue (GIR), along with the intendants Saúl Suárez and Fernando Botina, experts of the Unit Explosives of the Police of Colombia, toured yesterday the area where a car bomb exploded the dawn of Saturday 27, with the purpose to determine the possible causes of the attack.

The agents moved cautiously trying not to damage the scene of the incident. As soon as they discovered something, a red flag attached to an iron rod was sown on the floor. In San Lorenzo the state of exception governs.

The Minister of Defense, Patricio Zambrano, indicated that 1,000 uniformed officers of the Armed Forces and the National Police have been mobilized. The idea, he said, was to strengthen border security. Interior Minister César Navas announced that a program will be launched to include new regulations and specifications for the construction of community or district police units at the border.

What would be sought, according to Navas, is to have structures, such as enclosures, with specifications to deal with this type of event, which he described as coming as reprisals from narco-criminal groups. “There has been significant activity against organized crime on the northern border. The last week 7.5 tons of chemical precursors have been captured, more than a ton of drugs, seven people arrested that would be related to a criminal group, “he said.

Prosecutor, Carlos Baca, said that in the strategic part of the investigations, the case will be taken directly from Quito. “We have visited and verified the seriousness of the events. We have seen how this terrorist act pretends or has tried to spread fear among the population of San Lorenzo and also in the country, and we will not allow that, “he said.

Rommy Vallejo, of the Senain, indicated that the intelligence system was already working and that is why, in coordination with institutions, such as the Ministry of the Interior, previous captures have been made and the results of the operations have been achieved. “The intelligence system was already with this information and that is why we have this type of retaliation. (…) We did not have information that an attack could occur, because if we had that kind of information, we would not have let it happen, “she explained.

Jenny Nazareno and Fanny Carabalí, along with other residents of San Lorenzo, demanded help from authorities who toured yesterday the area in which a car bomb exploded, including ministers Navas and Zambrano. According to the women, the immediate help has reached the people of the area near the San Lorenzo police station, but not to the people around who, although they did not lose their homes, the structures were affected. They alluded to cracks in the walls or the lifting of the floors.

Navas toured for the second day the devastated areas resulting from the attack perpetrated at 01:40 on Saturday 27, in which there were 28 injured and motivated, according to authorities, by drug traffickers.

In Montecristi, Manabí, the Deputy Minister of Defense, Miguel Vega de la Cuadra, said that the joint command of the Armed Forces could mobilize personnel if necessary, and that free passage along the northern border would not be interrupted. (

The explosion of the car bomb left that number of injured, most not serious.

The number of family properties damaged by the explosion reaches that number in San Lorenzo.

The Government decreed the state of emergency in San Lorenzo for two months. (The facts) are incentives to know that we are on the right path.

“We are in the fight against organized crime. Ecuador is a country of peace and the authorities are committed to keeping it that way.” César Navas, Minister of the Interior. (I)