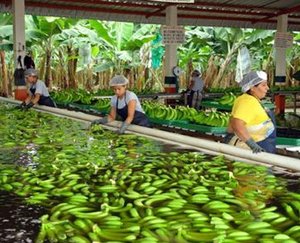 While livestock, banana and potato producers catalogued 2013 as one of the years of greater economic losses, a report released by the Central Bank of Ecuador indicated that six products have substantially increased their exports.

For Gustavo Marún, President of the Ecuadorian banana Corporation (Agroban), around 60,000 hectares have been lost due to the withdrawal of many producers from the activity because of the lack of guarantees. They expect improvements with the latest measures taken by the Government and thinks that the creation of a Research Institute, specifically for banana would be a good idea.

Iván Ontaneda, President of the National Association of exporters of cocoa (Anecacao), thinks that 2013 has been a good year for this sector. 2013 Closed with 200,000 tons for export and 12,000 to 15,000 tons for domestic consumption. With the program implemented by the Government he believes that in 2018 they will surpass the 350,000 tons of production.

José Antonio Camposano, President of the National Chamber of aquaculture, 2013 finished with a positive balance, despite the serious problems of insecurity. By 2014, they expect to achieve the signing of the agreement with the UE, because  that market represents a little more than 40% of the sales. Also, he expects to achieve major approaches with the State Banking for credit lines that promote modernization

Teófilo Carvajal, Manager of the Federation of livestock of Ecuador, explained that in 2013 the livestock sector ceased to be profitable. “Approximately of the 290,000 farmers  in the country about 30,000 have left the activity, for not been able to maintain it”. Luis Zambrano, President of the Guild, stressed that they aspire for a preferential treatment in credits and more support from the Government authorities.

Benjamín Pozo, Vice President of the Council of communities of Montufar, Carchi, said that this was not a good year for the potato producers . Quintal prices fell up to 5 dollars when it costs them $200 produce a quintal. One of the causes is the smuggling across the Colombian border.

Nadal continued to the second round of the Australia Open