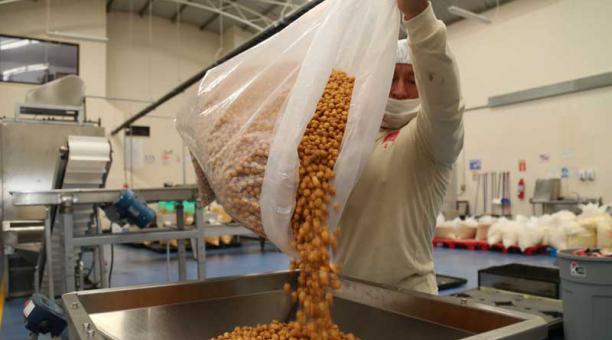 Since 2015, exports from the agri-food sector have outstripped oil shipments, a trend that continues this year. Incomes from crude oil exports fell by half between 2013 and 2016. In contrast, in the same period, the agri-food sector grew by 12%, thanks to the innovation of companies that opted for the diversification of their products.

Agri-food shipments totaled around USD 9 billion in 2016, according to data from the Association of Food and Beverage Manufacturers. Within this sector, there are two types of activities. The first includes agricultural products and that have some basic industrial process. Among the others is frozen food, washed and chopped.

This segment represents 15% of the Gross Domestic Product. Another relevant activity within this sector is processed food, where there is a greater added value of the industry. According to data from the Banco Central del Ecuador, among the most relevant activities for the economy of the country are the processing of meat, shrimp, and fish; production of oils, dairy products, noodles, chocolate and beverages.

The executive president of the Association of Food and Beverage Manufacturers., Christian Wahli, explained that the industry closed the first half of this year with positive results, although he did not give figures. The sector expects to end this year with an increase in sales thanks to a revival of consumption at Christmas and New Year.

In these figures, the Association of Food and Beverage Manufacturers, does not count the activity in the field or those small companies or that work autonomously. The Chamber of Small and Medium Enterprises of Pichincha registers 210 partners related to this activity.

Édison Romo, vice president of this organization, explained that among the companies they own bakeries, cereals, liqueurs, meat, confectionery, biscuits and restaurants. The food sector is the most important of the Chamber of Small and Medium Enterprises of Pichincha in terms of sales. In 2015, the turnover of these companies exceeded USD 600 million, said Romo.

The sector has been subject to regulations such as the implementation of good manufacturing practices the food traffic light adopted in 2014 and regulations on advertising.

Wahli recalled that the implementation of the food semaphore reduced sales in companies, especially dairy. The main categories affected were those of yogurt and cheese, according to the Association of Food and Beverage Manufacturers, due to a bad categorization of their products. The organization works with the Ministry of Health to modify the standard.

When the mechanism was applied, 80% of products registered high fat content, salo sugar (red light). Currently, less than 40% is registered with signage in red. To reach these levels it was decided to use natural sweeteners or artificial sweeteners.

Some companies included options with lower caloric content. Others incorporated ancestral raw materials and high protein content such as quinoa, amaranth, beans, and cherries in the preparation of cereals, flour, snacks and others.

One of those companies is Cereales Andinos. This industry, located in the north of Quito, transforms quinoa into breakfast cereals and snacks.

The company focuses on a niche of consumers that is growing: customers who bet on healthy and nutritious products.

The incorporation of natural fruits and vegetables into beverages has been another innovation of the industry. The chocolate industry has also included new ingredients and “country brand” such as roses, chifles, chili, mortiño, among others.

The sector is betting to grow this year, furthermore, driven by the agreement reached with the European Union, which has been in force since last January. Extracts of passion fruit, made from bananas, chocolate, industrialized coffee are among the products whose shipments have grown to the European block.

However, there is also concern that the fee preferences that Ecuador has with the United States have not yet been renewed. The benefit will expire in December and will impact products such as: fruit juices, frozen vegetables, sugar, among others. Another element of concern is the draft Health Code, which is under analysis by the Assembly. The document proposes new changes for the sector such as, for example, the introduction of the figure of hyperprocessed foods. (I)