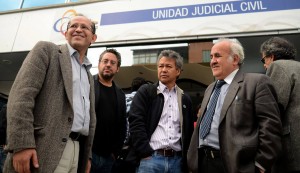 Of ten questions submitted by the Secretary of Communication, Fernando Alvarado, so Roberto Aguilar answers them in a judicial confession, seven were objected by the judge of the Civil Unit, Gabriela Lemos, and the defenders of the journalist: Juan Pablo Alban, Farith Simon, Daniela Salazar and Juan Pablo Salazar.

The remaining three intended, according to his lawyers, that Aguilar admits he is the representative of the blog Estado de Propaganda (State of Propaganda). In the first two, he merely pointed out that the blog is of his authorship and that the articles are his responsibility. The third question was if he was the author of the publication “The eloquent silences of the correist apparatus,” against which Aguilar said he does not remember all the titles published, “but if an article with that title was published in my blog is my responsibility.”

Simon explained that the process held yesterday is preparatory and it would serve to start another lawsuit.

Transitional provision could be extended to sectional authorities in 2019