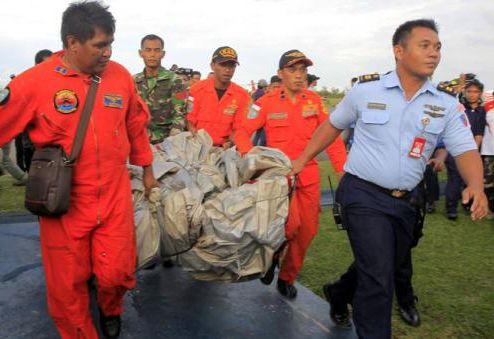 The Indonesian Army found today fuselage remains and corpses at the south coast of the Borneo island, which correspond to the AirAsia plane, disappeared on Sunday, according to the head of Indonesian rescue services, Bambang Sulistyo.

The Indonesian navy recovered in the Java Sea more than 40 bodies of occupants of the AirAsia plane, disappeared with 162 people on board, flying between Indonesia and Singapore.

“The warship” Bung Tomo “has recovered 40 bodies and the number is growing,” the spokesman Navy Manahan Simorangkir told to AFP.

They were found “in the sea, 100 miles (160 km) southwest of Pangkalan Bun,” city in the central Kalimantan province on the island of Borneo, he added.

Indonesian TV showed pictures of the first body found, floating in the water, causing a strong commotion among the relatives of the passengers, present in Surabaya city where the plane had taken off.

Aboard the apparatus were traveling 155 Indonesians, three South Koreans, one French, one British, one Malaysian and Singaporean. In total, seven crew members and 155 passengers, including 16 children and a baby.

Aboard the apparatus 155 Indonesians were traveling three South Koreans, one French, one British, one Malaysian and Singaporean. In all, seven crew members and 155 passengers, including 16 children and a baby.