Alberto Dahik proposes to ensure the model of Guayaquil 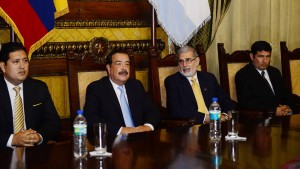 Former Vice President Alberto Dahik again referred to the current situation of the national economy, this time at a conference for the Day of the Ecuadorian Economist, which took place last Monday in the City Hall.

Dahik reiterated, as on previous occasions, that the problem of Ecuador is not a result of low oil prices, but the mismanagement of public spending.

He also said that if measures are not taken in 2016 “the recession will become endemic as it happened in Greece and Puerto Rico.”

In this context, the former vice president made two proposals to improve the economic prospects of the country in 2016: the first was to study the economic model of the Municipality of Guayaquil, on which he said that not even 20% of the expenditure to corresponds to current expenditure.

There was no agreement on the issue of the collective agreement