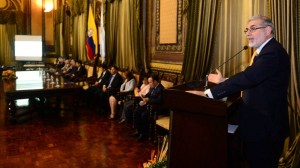 This Monday at an event chaired by the Mayor of Guayaquil Jaime Nebot, the former vice president of the Republic Alberto Dahik gave a lecture on the economic situation and the prospects for next year.

The event, organized by the Association of Economists of Guayas on the occasion of the Economist Day, was held at the City Hall.

During his speech, Dahik insisted -as he has on other occasions- that an alleged mismanagement in the public sector would be the cause for the current national economic situation and not the fall of oil prices.

He also said there would be a deficit of 3,500 million dollars in the Central Bank of Ecuador to back up deposits.

As he has been saying in recent months, the former vice president said that the national economy is in recession and warned that it might become endemic as it happened in Greece and Puerto Rico, if measures are not taken for 2016.

Finally, he suggested raising the dollarization to a constitutional precept “so it is not altered.”

Oversupply reduces the price of bananas in the world