Albuja rejects report of the Commission for `falsehood and misconduct´ 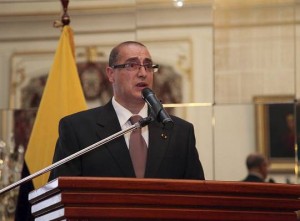 Marco Albuja, ambassador to the Organization of American States (OAS)

The President of Colombia, Juan Manuel Santos, announced to local media of this country that he will challenge the judgment of the Superior Court of Bogota that reinstated Mayor Gustavo Petro.

The President said he will make it `because it is an action that is putting into question an action that made ​​the government, so the obvious is to appeal it.´

Santos reinstated Petro in his office last Wednesday, welcoming the decision of the judge of a court that ordered him to comply with a ruling by the Inter-American Commission on Human Rights to keep him in office, an order the President had unknown a month earlier.

`It has nothing to do with whether we are for or against Petro, but rather we are being consequent with what we have said from the first day one this sad process began,´ Santos said.

The Colombian Supreme Court of Justice will have 20 days to pronounce on appeal.

Correa about Yasuní: “We need the money to overcome poverty”