Alerts about irregularities in Petroecuador began in 2008

Carlos Pareja Yannuzzelli would have sent a letter to Rafael Correa and warned the Ministry of Non-Renewable Natural Resources about possible damages in the contracts signed by the state oil company. 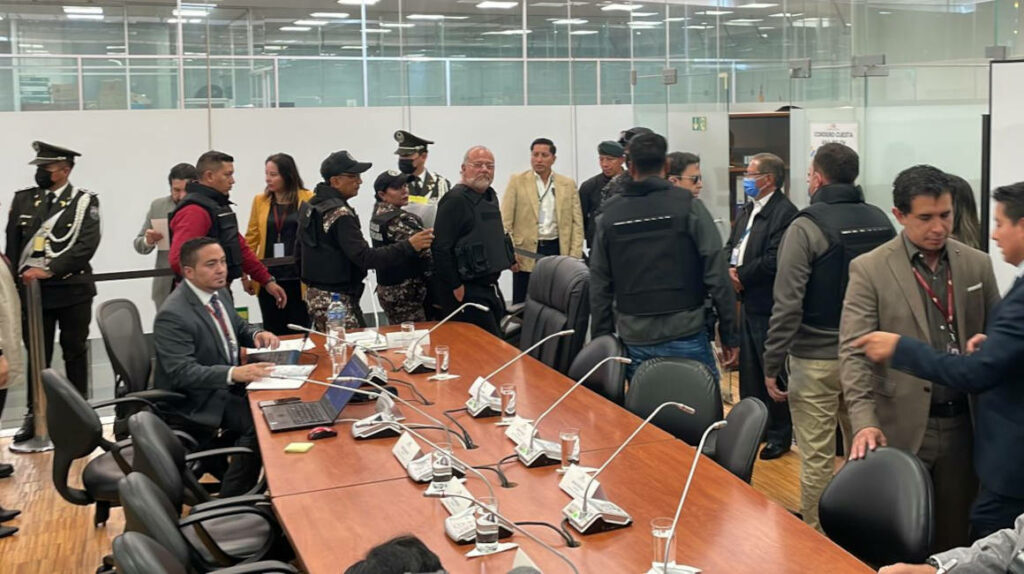 Carlos Pareja Yannuzzelli, a former Correismo official, in the Audit Commission of the Assembly. Quito, November 9, 2022.

The figure of Carlos Pareja Yannuzzelli becomes important again after the investigation in the United States of Nilsen Arias, the former International Trade Manager of Petroecuador.

Pareja Yannuzzelli, better known as ‘Capaya’, will appear this Wednesday, November 9, 2022 before the Audit Commission to talk about a failed effective cooperation agreement with the Ecuadorian Prosecutor’s Office.

The corruption plot in the Petroecuador contracts was exposed with the prosecution of Nilsen Arias in the United States, which was made public in October.

The investigations point to oil presale contracts between Petroecuador and Asian state companies, such as Petrochina, Unipec and Petrotailandia (PTT).

However, alerts about irregularities in Petroecuador’s International Trade management had already been triggered years before.

Since he was Vice Minister of Hydrocarbons, Pareja Yannuzzelli denounced the irregular handling in the International Trade management of the Ecuadorian oil company.

He did it again when he published the so-called ‘Capayaleaks ‘, a series of videos on social networks in which he underwent a polygraph and denounced the corruption revealed in 2016. Currently, Pareja Yannuzzelli is detained in Prison 4 in Quito.

According to ‘Capaya’, he notified the government of that time about the irregularities on several occasions.

In a letter sent on August 19, 2008, to then President Rafael Correa, ‘Capaya’ warns of possible damage to Ecuador in the sale of 11 batches of Oriente crude.

The letter says that the processes were not competitive and that the contracts were awarded with a differential (discount) higher than that proposed by other companies, which were disqualified.

One of the firms that were awarded oil contracts with a price that harmed Ecuador, says the letter, would be Petrochina.

The letter, signed ‘Charly’, as ‘Capaya’ was known within the Correa government, bears the receipt stamp of the Presidency, dated August 19, 2008.

Years later, ‘Capaya’ sent a new official letter about the irregularities in the International Trade management of Petroecuador, in front of which was Arias, also known as ‘El Gordo’.

The document, dated September 27, 2011, is addressed by ‘Capaya’ (then Vice Minister of Hydrocarbons) to the then Minister of Non-Renewable Natural Resources, Wilson Pastor .

The official letter speaks of irregularities in a contract to import premium diesel and in another contract to buy high-octane gasoline. In both processes, the finger of ‘Capaya’ points towards the management that Nilsen Arias headed.

Regarding the purchase of premium diesel, ‘Capaya’ says that he received the documentation (cargo manifest and certificate of origin notarized in New York) for a shipment destined for the port of Esmeraldas two days before the bid envelopes were opened to award said contract.

According to Pareja, the diesel had the acronym GLE, corresponding to the intermediary (trader) Glencore, despite the fact that the company awarded was the state-owned PMI (from Mexico).

Therefore, ‘Capaya’ concludes that PMI resorted to a trader (intermediary) to provide Ecuador with the volume of diesel agreed in the contract.

‘Capaya’ narrates that he consulted Nilsen Arias about this, but he replied that he was not in the country at the time of the award.

Regarding the purchase of Nafta, ‘Capaya’ explains that Comercio Internacional called for a tender on September 14, 2011, but invited Trafigura , a company that was in litigation with Ecuador.

The International Trade management received the offers for the acquisition of gasoline, but the contest was declared void “by order of the Presidency of the Republic”.

Pareja asked Minister Pastor to analyze requesting the resignation of “all those involved in these processes.”

The president of the Control Commission, Fernando Villavicencio, published a document dated December 20, 2011, in which irregularities similar to those denounced by ‘Capaya’ and which also point to Arias are denounced.

In a report from the Ministry of Non-Renewable Resources, it is established that a shipment of 93 and 95 octane Naphtha, required by Petroecuador, was shipped one day before the contest began.

This contest is the same to which ‘Capaya’ refers in his trade to Wilson Pastor.

The contract was awarded to the Uruguayan state oil company Ancap, but the supplier was actually the Bahamas Oil Refining Company.

In other words, although Petroecuador supposedly made direct awards , in order to eliminate intermediaries to get better prices, in reality it used traders.

The conclusions of the report, also signed by ‘Capaya’, ensure that the intervention of an international firm is necessary to “accompany the management for a certain time to the International Trade Management, in order to train the staff and establish the appropriate processes for the benefit of the State”.