Algeria Protest to Overthrow its President 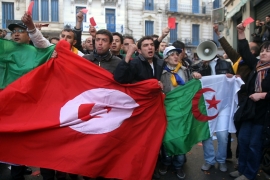 At the Algerian capital 2,000 persons convened to “request a system change” 30,000 police attempted to prevent the march which toured 4 km from Concorde square until Martyrs Square.

According to the Interior Ministry, 250 people participated in the demonstration at Concorde Square, but reporters estimated that the number of protesters increased to 2,000.

The Interior Ministry assured that 14 people were briefly detained, but the Algerian League for the Defense of Human Rights (LADDH) announced that there were “over 300” detainees.

“Some were released but others are still detained,” stated the president of the LADDH, Mustapha Bouchachi.

Among those detained were two members of the Rally for Culture and Democracy (RCD), Othmane Mazuz and Feta Sadad, also Bumala Fodil, founder of the National Coordination for Democracy and Change (NDCC ), which called the demonstration, was detained.

In the afternoon, the city returned to normal and there was no damage or injuries.

Weekend of Protests against Berlusconi