Alianza País discusses the expulsion of two councilors of Cuenca 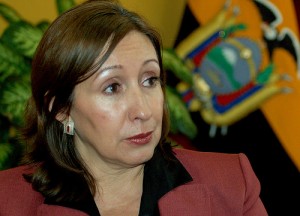 The executive secretary of Alianza País, Doris Soliz, commented about the twist of his political movement in the election of the Deputy Mayor of Cuenca yesterday afternoon.

On her Twitter account @ dorissoliz wrote that she will adhere to the discharge request of councilors Ruth Caldas and Norma Illares who belong to the 35 list. And that order will be processed immediately by the Committee on Ethics and Discipline. Caldas was re-elected as Deputy Mayor with eight votes against seven votes of candidate Berrezueta Leonardo, who was the PAIS officer aspirant for that charge.

But in the election, Caldas voted for herself and Illares blank. Thus this, Caldas, who was proposed by alliance Igualdad-Participa officers, took the charge. It was described as treason by Rafael Correa’s Party councilors and called their expulsion. Soliz said in her account feeling deep regret with this sedition to Berrezueta and his political party