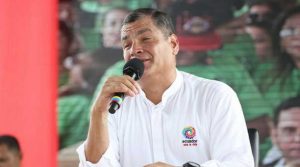 During his last weekly address, broadcast from the Manabi province, as a symbolic remembrance act of the birth of the Ecuadorian constitution of 2008 in Ciudad Alfaro, something that would later constitute the bases of the “citizen revolution” carried out during his decade of government, Rafael Correa gave some guidelines a few days before the inauguration of President-elect Lenin Moreno.

Defending the ‘revolution’ and the next government under the leadership of Alianza PAIS (AP), was the petition of Correa, after giving the floor to Gabriela Rivadeneira, who was appointed as executive secretary of AP on May 1st. The Legislator said that the activation of the citizens to defend the revolution is fundamental and announced that the ‘Leonidas Proaño Lifelong Learning school’ will be created for this purpose.

Correa defended his government’s decision to denounce 16 Bilateral Investment Treaties (TBIs). He said they were detrimental for the country, in cases such as Oxy and Chevron Texaco. He also contended that the Code of Security Agencies is a necessary measure and there is no danger in creating an Armed Civil Security Body to protect the authorities. According to the President, there are similar groups in countries like the US.