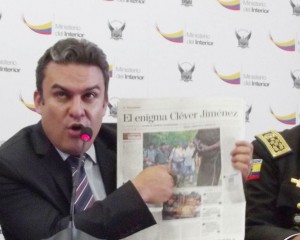 The Interior Minister, José Serrano, yesterday reported that `armed and paramilitary groups´ would be protecting the former Assemblyman Clever Jimenez and his advisers Carlos Figueroa and Fernando Villavicencio, who are refugees in Sarayaku territory, in the province of Pastaza.

Yesterday, around 09:00, two helicopters landed in the Amazon community, with an unarmed crew, ensured Serrano. They aimed to verify the presence of the three sentenced to prison for insulting the President Rafael Correa.

Immediately, about 300 people from the community would have surrounded the aircrafts, among whom were hooded men with guns, who supposedly forced out members of the authority.

`We will not allow this. Three fugitives guarded by armed men is unacceptable. We will present a complaint for investigation, because there is at least a crime of illegal possession of weapons,´ said Serrano.

Housing and Finance Ministers will explain the implementation of the budget