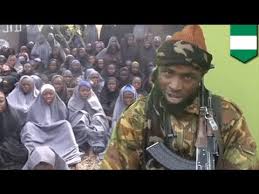 Abubakar Shekau, Boko Haram’s supposed leader, has said that more than 200 youths abducted six months ago have been “married” to his fighters, AFP reported on Saturday. This, contradicting claims from the Nigerian government that they would be released soon.

The Nigerian Army claimed to have killed Shekau a year ago.

The man that said to be Shekau also denied that there was a ceasefire during the talks, and said his group has a German prisoner hostage kidnapped in the city of Gombe in July.