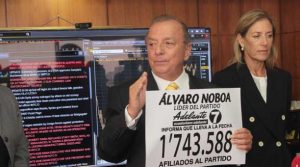 The five-time presidential candidate Alvaro Noboa, reported that his party Adelante Ecuatoriano Adelante, constituted from August 18, has more than 1.7 million members nationwide. on Monday afternoon September 19, 2016, at the headquarters of Industrial Molinera, the businessman said that his party will continue to add supporters to mediate the elections of February 2017. And to do that, they are analyzing to make alliances with other political parties.

“Large parties, such as Patriotic Society, which came in second place in 2009 and third in 2006, look with good eyes this alliance,” he said and stressed that there would be two major political battalions, allied for the elections. “I’m still looking for a single candidate, who represents the renovation and the change. And there is only one candidate for the 35 party, who would represent the continuity. I am in that journey,” said Noboa, surrounded by some of the figures of his party, faces that also accompanied him in the extinct PRIAN.

The businessman also referred to President Rafael Correa. He said he “forgives” him for all “the damage he has done” by constantly mention him during the weekly addresses. And asked him to, “not feel hatred towards him.” “I have not had the pleasure of personally meeting him (Correa), but I think his time to leave has arrived and of having a nice family life as he promised his people,” he concluded (I).

A model city will land in the Olmedo airport