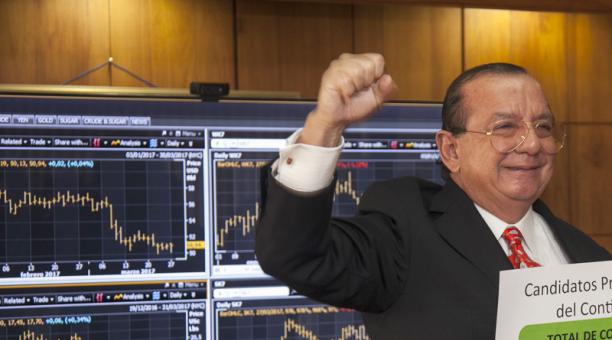 The five-time presidential candidate, Alvaro Noboa, said that the opposition has the majority of votes to take Guillermo Lasso, presidential hopeful of the Creo-SUMA coalition, to the presidency on April 2, 2017. He gave statements on Monday, March 2017 during a press conference in Guayaquil.

The Guayaquil businessman made a calculation based on the results obtained by the presidential candidates and proclaimed by the National Electoral Council on the elections of last February 19. Noboa named former presidential hopefuls Cynthia Viteri (PSC), Paco Moncayo (ID), Abdalá Bucaram Pulley (FE), Patricio Zuquilanda (PSP) and Washington Pesántez (EU). For Noboa, the electoral results obtained in the first round by Lasso and the number of votes achieved by those candidates who offered their support would add 57.46%.

“That must be the results on Sunday, do not believe in the polls, this is pure mathematics, I am great in mathematics … do not believe in liars pollsters, the people already voted so that (Rafael) Correa go home and will vote again like this,” he said.
According to Noboa, Lenin Moreno, who got 39.36% of the votes in the first round, will only add the 3.18% obtained in February by Iván Espinel, former presidential hopeful of the Social Commitment party and who currently supports the candidacy of the government´s candidate.
“I hope that all Ecuadorians are consistent, and vote according to the results of the first round of elections,” he said. Noboa added that by knowing these numbers, an alleged electoral fraud will be avoided. He explained that on April 2, Ecuadorians will decide between the government of “extreme left and continuity” or “the change towards a better Ecuador.”
The former presidential candidate also referred to the absence of Lenin Moreno in the debate ‘Conversando por el Ecuador,’ organized in Guayaquil by several guilds and national associations.