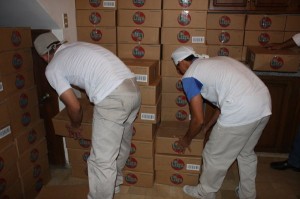 Wednesday afternoon Abogado Alvaro Noboa delivered 100 Short hundredweight of “Lista” flour to the Embassy of Panama to help the victims of that country.

The heavy rains that lash Panama have affected 13.400 people, the worst affected areas are the provinces of Colón, Darién, Panama and the Caribbean region’s indigenous Kuna Yala. The country considers these rains as one of the worst disasters in the recent 100 years of the country. In addition, the areas that did not were hit directly by rainfall also have been affected by shortage of drinking water, food, and electricity cut off.

The humanitarian entrepreneur, Alvaro Noboa, took action quickly to deliver hundreds of bags of flour to the embassy and help a thousands of families that have nothing to eat.

At 12:00 a Molinera truck arrived to the embassy located in the north of Guayaquil. The Consul gladly received from the hands of Molinera´s functionaries , the boxes of “Lista” flour.

Alfonso Harb is the New President of BSC