Alvaro Noboa speaks of “electoral inconsistency” in the Legislature results 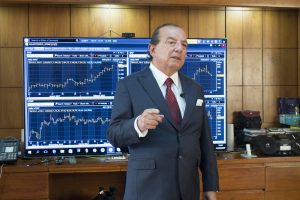 The Ecuadorian businessman Alvaro Noboa mentions the “electoral inconsistency” in the counting of votes at the Legislature level by the CNE.
Noboa explains that candidates of the Alianza Pais party have 48% of the votes, thus overcoming the presidential hopeful Lenin Moreno, who so far has 39,20%, according to the National Electoral Council.

According to a publication by Daily Expreso, it shows the list of political parties like Force Ecuador, Ecuadorian Union, Avanza, Sociedad Patriótica and Adelante Ecuatoriano Adelante obtained from 2% to 0% of votes.

The leader of the Adelante Ecuatoriano Adelante party indicated that he has carried out an investigation which reveals that in all the provinces the result was equal. “The result was 1% and 2%.” The 2 million members of his party would represent 20% of the votes. “How did they do that? Who?” Noboa asked.