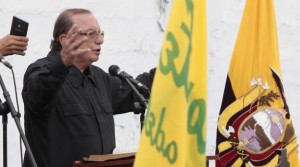 The new formed political movement, “Adelante, Ecuador, Adelante” delivered this Monday, 44,000 supporting signatures to the National Electoral Council (CNE). Wilson Sanchez, its national director, also reiterated that Alvaro Noboa will be a candidate for the Presidency in 2017.

This would be the sixth time Noboa tries to become President. The new formed political movement is confident they will achieve a final legal status, which is the main requirement to stay in the elections.

When they delivered, in total, 301,600 signatures, brought from all provinces, the CNE was disapproving even though the legal quota was met. according to Sanchez. Therefore, a set of additional 175 000 valid signatures were gathered, which represents the 1.5% of the current electoral roll.

According to the election schedule, they have until July 18th to deliver the requirements and in mid-October to finalize the registration of the candidates.

Sánchez invited all political and social organizations to join in support of the candidacy of Álvaro Noboa but warned they will not support another candidate. According to the director of the political movement, Noboa has demonstrated his entrepreneurial skills to generate wealth and confidence and that is what the country needs given the current economic situation. (I)

In nine years, the President has granted nationalization to 43 foreigners