Alvaro Noboa will support the opposition candidate in the runoff election 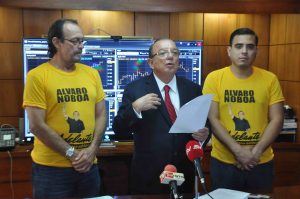 The businessman and leader of the AEA party expressed his support for the opposition candidate.

The leader of the Adelante Ecuatoriano Adelante (AEA) party, Alvaro Noboa, announced that he will keep his opposition line against the current government and will not vote for its candidate in case of a runoff of presidential elections in the country.

During a press conference, the afternoon of this Wednesday, February 22, 2017, in Guayaquil, Noboa said: “we did not have a presidential candidate, and Guillermo Lasso belongs to the opposition. Therefore we are going to continue in our line of resistance.”

Regarding a possible rapprochement with the candidate of Alianza Pais, the banana tycoon responded that although he has the best opinion of Lenin Moreno, ideologically there is a “one-kilometer” distance between them. “But he is ten times better than Rafael Correa. But we will not vote for anything that represents the continuity.” He also indicated that if he had not given up his presidential candidacy, there would be no possibility of going to the second round of voting. “I took a step back for Ecuador to take a step forward. If I ran or president, I would have broken the unity of the opposition and I assure you that Lenin Moreno or I would have won.

Noboa called the media at 16:30 to denounce a suspected electoral fraud against his political organization.

He said that according to his projections, the AEA party should have obtained between 20 to 30 assembly members, but on the contrary have reached smaller allocations.

According to the businessman, the AEA has more than two million members and was responsible for 20% of the 10 million valid votes, but official figures show a 1% and 2% of votes.

He said that the alleged fraud would be carried out to favor the Legislature candidates of the Government, and for this reason he stated that he will file a complaint against the National Electoral Council (CNE).

“We are going to demand transparency to protect democracy and 20 parties that have not obtained not even one legislator.”